You've never been to the United Nations headquarters in New York? Or you're planning a visit soon?

On Monday, 24 October 2016, the United Nations Day, UN Visitors Services launched a free mobile app with details about the art on display in public areas of United Nations Headquarters in New York. The app features 65 works of art and architectural elements in the Plaza, Visitors Lobby and Visitors Centre of the GA building.  The App can be downloaded thru Google App or Apple store with keywords “UN Visitor Centre”. 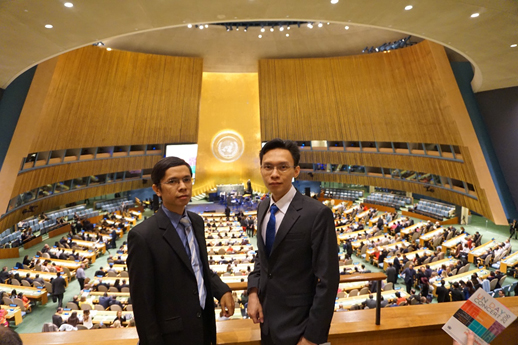 Mr. Trần and Mr. Lê completed the Bachelor of Computer and Information Sciences (BCIS) program at ITEC, a collaboration between University of Science - VNU in Ho Chi Minh and Auckland University of Technology.  Both was invited by the United Nations to come to its Headquarter in New York City, US to launch the app as well as celebrating the 71st UN Day.

Being invited to the General Assembly Hall for a speech by Mr. Ban Ki Mon, the UN Secretary General, and a concert by the Hungarian National Philharmonic (the oldest orchestra from Hungary) are part of the agenda.

Ms. Cristina Gallach, Under-Secretary-General for Public Information and Communications, came down to the Visitors Centre in the 1B of the General Assembly building, where she joined Visitors Services and FromLabs staff in the launch of a free mobile App showing what to see in the public spaces at UN Headquarters. 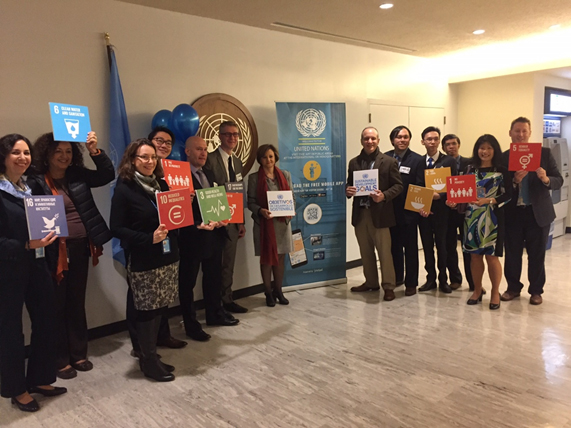 In the same time, New York City has designate UN Day, 24 October, as an official day on the City's calendar.  The Mayor’s Commissioner for the UN, Ms. Penny Abeywardena, marked this milestone by presenting a special proclamation to Under-Secretary-General for Public Information and Communications, Ms. Cristina Gallach, signed by NY City Mayor Bill De Blasio.

Ms. Gallach received the proclamation and the well wishes from the Mayor’s team alongside UN staff outside the Visitors gate in front of a poster designating New York as a City of United Nations. This poster is part of a campaign launched by the Mayor’s office to promote the UN to both visitors and residents throughout New York City.

In connection with the launch of the App on UN Day, Visitors Services staff also set up an area in the Visitors Centre to take photos of visitors holding their favorite SDG sign. Visitors were encouraged to choose a sign in any of the six official languages and have their photo taken, to be shared on the UN’s social media.